The Eagles at Eagles Landing 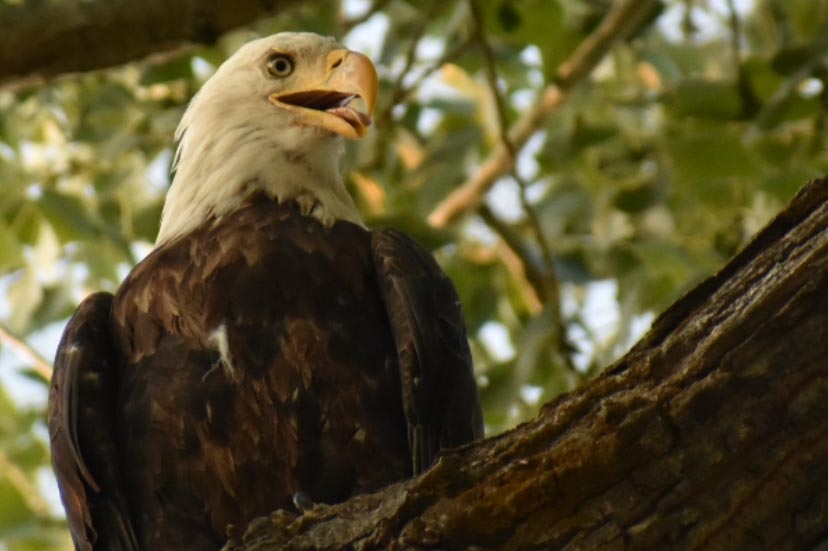 One of the unique things about Eagles Landing Venue is the pair of nesting bald eagles we have. We were blessed with these beautiful birds two years ago when, for some reason, they chose our huge old tree out front. During the first spring the pair built their nests. It was an amazing sight to watch the eagles take huge branches in their talons and beaks and circle the tree until they were at the right height. Then they would crash land with those large branches into their nest and would continue to build it! The first year we could not determine if there were any eggs in the nest. When the leaves formed on the tree we no longer saw the pair of eagles and feared they decided to choose another place for their home.

The next spring we were delighted to see the pair of eagles return to the nest they began. It was a treat to watch them repair and maintain the nest. We anticipated they would leave again after the leaves formed on the tree, but this time the did not. The eagles would snip off the branches around the nest and let them fall to the road below, providing them with some extra room to land in the nest and creating a good vantage point for any potential danger.

Throughout the summer we watched as the pair brought food to their new eaglets in the nest. We were not sure how many there were but we knew at least two young eagles were being cared for. As you can imagine the nesting pair became a hit among the neighbors and local bird watchers. Sometimes there were so many people gathered we opened up the gates to allow parking so spectators could observe and take photographs. In early June we found one of the eaglets on the road and it appeared to have been run over. So out came the orange cones and slow down signs warning drivers to watch for the eagles.

As the summer came to a close and fall began with cooler weather we were lucky enough to observe the pair teaching the young eaglet to fly. After a few weeks the young eagle would join the parents and fly off for the day, and come back to the nest in the evening around dusk. Fall is in full swing now and the leaves are changing color and falling off the tree.The nesting pair are still in the nest and making it larger everyday. We can hear them calling out during the day and early evening.

The eagles are precious to us and have been an inspiration to us as we created our venue for others to use and enjoy. You can use our unique venue to host your special event, wedding, or party. Eagles Landing gives you the opportunity to enjoy viewing these majestic birds and respecting the beauty of nature during your event.